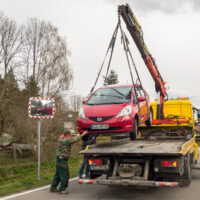 A 15-year-old Spring Hill girl is dead after a tow truck backed out of a driveway and nearly crushed the vehicle it struck.

According to the Florida Highway Patrol, a Mazda Miata was eastbound on County Line Road near the Hernando County – Pasco County line when a tow truck suddenly backed out of a driveway. The tow truck’s flatbed smashed into the Miata, killing the young girl, who was a passenger, almost instantly. Neither driver was hurt.

No charges are pending against either driver at this time.

Many accidents are like the one in the above story. One driver clearly fails to yield the right-of-way to another driver. Legally, these situations usually involve the ordinary negligence doctrine or the negligence per se shortcut.

Failure to yield the right-of-way violates several traffic code provisions. In the Sunshine State, tortfeasors are presumptively liable for damages if:

Since the law establishes the standard of care, the individual driver’s legal duty is largely irrelevant.

However, as in the above story, many emergency responders do not issue citations in fatal accidents. They view these incidents as civil disputes between insurance companies. So, they do not want to get involved.

If a commercial driver caused the crash, the respondeat superior rule usually applies. Towing companies and other entities are legally responsible for the negligence of their drivers if:

Other employer liability theories, which often apply in assault or other intentional tort claims, include negligence hiring and negligent supervision.

Large commercial vehicles often cause serious injuries. For a free consultation with an experienced Tampa car accident lawyer, contact Mark H. Wright, PLLC. You have a limited amount of time to act.