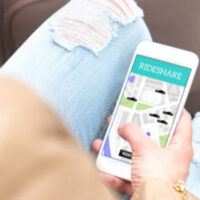 According to a recent study, Uber, Lyft, and other ridesharing companies are directly responsible for a significant uptick in traffic accident deaths. Because these accidents are so common, we get lots of questions about them. Although these wrecks are complex, maximum compensation is usually available.

Fatigue and distraction are two of the most common causes of ridesharing accidents in Hillsborough County.

Rideshare driving is a full-time job for some. But it’s a part time job for most. Typically, Lyft and Uber drivers have full time responsibilities elsewhere. So, when they get behind the wheel, they are often dangerously fatigued. That’s especially true at certain times of day, such as early in the morning, when most people are naturally drowsy.

Device distraction is another issue. It’s legal in Florida to drive while using a hands-free GPS navigation device. But it’s very dangerous to do so. These gadgets are visually and cognitively distracting. These drivers take their eyes off the road and take their minds off driving. In fact, according to one study, driving while using a hands-free cell phone is as dangerous as driving while intoxicated.

What Determines Fault in a Ridesharing Accident?

A legal concept called the duty of care often determines fault in car wreck claims. Duty is the foundational element of a negligence claim.

Most noncommercial drivers have a duty of reasonable care. They must be mentally and physically fit to drive. Furthermore, while they are behind the wheel, they must watch the road and drive defensively.

Most commercial operators, including Uber drivers, have a duty of utmost care. They must leverage all their skill and experience to get their passengers safely from Point A to Point B. So, rideshare drivers have an affirmative duty to avoid accidents.

How Do You Prove Liability?

Evidence in a rideshare accident claim usually includes the police accident report, witness statements, and medical bills. Attorneys must use this and other evidence to prove negligence, or a lack of care, by a preponderance of the evidence, or more likely than not.

This “other evidence” often includes surveillance camera footage and 3-D accident reconstruction videos. At least one red light or other camera covers pretty much every intersection in the Tampa Bay area. Frequently, attorneys partner with accident reconstruction engineers, who produce videos which dramatically demonstrate their conclusions.

Such evidence is often crucial. Especially in court, the old saying that “a picture is worth a thousand words” often holds true.

The respondeat superior doctrine usually applies if the tortfeasor was an employee who was acting within the scope of employment. Pretty much all Uber and Lyft drivers are employees for negligence purposes, even if they are independent contractors for other purposes. Furthermore, any act which benefits the employer in any way is within the scope of employment. That includes activities like deadheading (driving around waiting for a fare).

Other employer liability theories, which usually apply in battery and other intentional tort claims, include negligent supervision and negligent hiring.