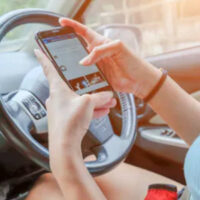 A driver’s over-reliance on a GPS navigation device caused a chain-reaction crash which sent several people to the hospital.

According to police and witnesses, a woman was westbound over the Gandy Bridge as she looked at a navigation screen. So, she did not see three vehicles which were stopped in front of her. An officer in an unmarked police car was assisting two disabled motorists. The distracted woman looked up and tried to swerve out of the way. But she clipped the police car and flipped over. The driver and officer were injured.

The force of the crash propelled the two disabled vehicles into a trailer. That impact injured three people.

The popularity of rideshare services has significantly increased the number of device distraction crashes in recent years. Yet statistically, most distracted driving crashes involve non-device distraction, such as eating while driving.

Regardless of the source of distraction, these wrecks often involve serious injuries. In fact, the average injury-related hospital bill usually exceeds $100,000. A Tampa personal injury attorney can obtain compensation for these medical bills, as well as lost wages and other economic damages. Typically, compensation is also available for noneconomic losses, such as pain and suffering.

Distraction and Negligence Per Se

Negligence per se is the violation of a safety statute. In Florida, tortfeasors (negligent drivers) are presumptively liable for damages if they violate safety laws and cause crashes.

In 2019, Florida lawmakers approved a slightly tougher cell phone law. But even still, it only bans texting while driving. “Texting” usually means sending or reviewing any text-based communication, like a text message, Facebook post, or internet site. Other prohibitions apply in certain areas, like school and construction zones.

Moreover, a few municipalities in the Tampa Bay area have stricter cell phone bans. If that’s the case, the stricter ban, and not the statewide ban, usually applies.

Non-device distraction includes things like eating while driving or talking to passengers while driving. Evidence in these claims includes erratic driving before the crash, physical evidence, like partially-eaten food, in the car, and statements the tortfeasor made to witnesses and first responders.

Victim/plaintiffs must establish negligence, or a lack of reasonable care, by a preponderance of the evidence, or more likely than not.