Police Dogs Are Violently Mauling Many Innocent People Each Year, Including Here in Florida 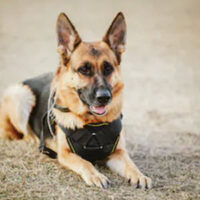 While rarely fatal, police dog bites often produce severe injuries, and, according to this recent expose by The Marshall Project, bite thousands of Americans every year, including innocent bystanders, the dogs’ handlers, and even the police officers themselves sometimes. In fact, police dog bites were the number one cause of hospital visits due to excessive force by police, with some of these incidents involving the dogs tearing arteries, chewing on necks, ripping off appendages, puncturing tracheas, and slicing carotid arteries. As a result, many have likened the wounds to shark bites and argue that the dogs should be classified as lethal weapons because being bit by one is akin to being shot.

Sadly, there is very little oversight regarding how these police dogs are used, and as a result, they end up being used not only in emergencies, but in low-level, non-violent incidents as well in a number of cities. While statistics indicate that approximately 15,000 are used across the US, dog handlers are not governed by any national requirements and there is no database tracking the dogs, number of bites, or the identities of who is bitten. As a result, programs involving police dogs have been likened by some to “the Wild Wild West.”

Abuse by The Police & Racial Profiling by… The Dogs?

Studies cited in the expose also show that Black males are the most common targets and victims of police dog bites: Between 2005 and 2013, these bites sent approximately 3,600 people to the emergency room every year (or approximately 28,800 total in that time period), and a majority were Black men. According to experts, handlers, and trainers, the dogs are only trained to create minor puncture wounds, and, if used properly, should only at most inflict minor wounds that require very little treatment. Officials also maintain that the dogs only bite a fraction of the time. However, no data is kept to prove this assertion.

Police have indicated that the dogs are necessary in terms of searching certain spaces and to chase down fleeing suspects. They have also indicated that they are careful about when they use the dogs because they are aware of how lethal they can be. However, footage obtained has captured a number of incidents involving the dogs being released on suspects that have already been stopped and surrendered in what appears to be police using the dogs to punish people. In fact, some cities that have undergone reviews of the programs have found regular “abuses of power” when police use the dogs.

Some of the injuries inflicted by the dogs are worsened by the fact that the dogs sometimes won’t stop biting unless they are aggressively pulled off by their handler (which makes the injuries worse) even though the dogs are supposed to release after responding to a verbal command. Victims of the bites have no options; It is impossible for someone to avoid moving while being bitten by one of the dogs, and yet the more they move, the more the dog bites them.

While those harmed sometimes end up filing excessive force lawsuits against the cities, still, these lawsuits can sometimes be challenging, as innocent bystanders don’t typically have access to bringing claims under federal civil rights laws, criminal suspects are usually barred from bringing these claims if they are convicted or plead guilty, and many jurors tend can be biased simply because they have an affinity for dogs. Qualified immunity–which shields officers from civil liability for negligence that results in harm unless another officer has already been held accountable by a court under the exact same circumstances–provides another serious hurdle for those seeking redress.

The Sheriff’s Department in Jacksonville, Florida had one of the highest rates of using these police dogs compared to others, with 160 dog bites occurring just between 2017 and 2019. Many of those bitten were unarmed and/or accused of non-violent crimes, such as being stopped due to an issue with their license plate, as well as people who weren’t even suspects in the first place, including a man who was just looking for his cat. If you or a loved one has been harmed by a dog bite here in Florida, regardless of whether it involved a police dog or not, contact our Tampa dog bite attorneys at the office of Mark H. Wright, PLLC today to find out how we can help.

By Mark H. Wright, PLLC | Posted on October 29, 2020
« When Dangerous Products Are Also Deceptively Advertised: The Latest Study On E-Cigarettes
If You Are Harmed by A Crime On Business or Public Property, Can You Recover Damages? »